A gripping final was decided in the most cruel of fashions, when Melbourne TFC’s Peter Thomas missed with his spare-keeper, allowing teammate Carl Young to manoeuvre and score the winner in a 4-3 decision.

Carl had opened the scoring, before Peter equalised, then Carl raced to a 3-1 lead. With the match seemingly lost midway through the second half, Peter staged a remarkable comeback, only to lose after an errant flick in extra time.

A new venue for Melbourne, Zagame’s — a restaurant and function centre — and a first sponsor  for the ATFA in Masita sports wear, were highlights of the weekend with 14 players from five Australian clubs, including the newly created Western Flickers TFC based in the west of Melbourne.

The opening rounds saw few surprises, though Eliot Kennedy (Nthn Falcons) had a tough battle against Giuseppe Tardiotta (Brisbane), leading 2-0 before Giuseppe scored twice in 40 seconds to level it at the break. Eliot steeled himself and won 4-2, while Carl had a real battle to beat Benny Ng (Western Flickers) 2-1, and Benji Batten (Melbourne TFC) survived some early scares to beat Steve Dettre (Nthn Falcons) 1-0.

In the quarterfinals, the standout was the cross-town derby match between Benny of the Flickers and Benji of Melbourne TFC. After extra time and no goals, it went to shots, with Benny claiming a tight 2-1 result.

Many thanks goes to Flickers’ Kevin Grant for transport, to Luke Radziminski, Adrian Connolly and Beth Eveleigh for setting up, and to Chris Simpson of Zagame’s and Masita’s Tim McKenzie and George Campbell for their support. 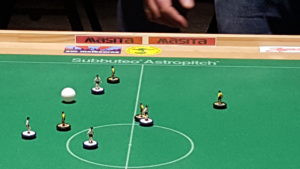 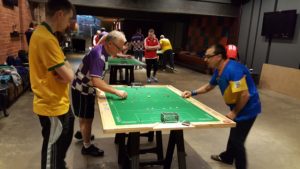 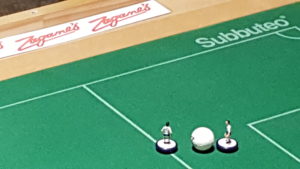 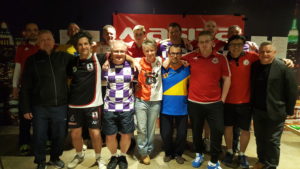