Logo for the 2020 FISTF World Cup in Rome revealed

The Federazione Italiana Sportiva Calcio Tavolo (FISCT), as hosts of the FISTF World Cup 2020, have revealed the World Cup 2020 logo before the Italian Club Championship of Serie A, B and C in which 48 clubs took part on the weekend.
Maurizio Cuzzocrea is the driving force behind the organising committee for the World Cup.
The logo features the famous Capitoline Wolf, depicting a scene from the legend of the founding of Rome. The logo shows a she-wolf suckling the mythical twin founders of Rome, Romulus and Remus, on a table football base featuring the Italian flag’s il Tricolore.
FISTF and the whole table football community wishes them great success and we hope that as many FISTF member nations as possible with participate.
More information on the World Cup will be released in coming weeks.

Rome will be the 30th WORLD CUP  since 1970, when the first World Cup was played in London (cumulative stats of FISA and FISTF events)

5th time that Italy will be host nation of the world cup since 1990.

Start practising today and prepare for your next World Cup match 2020. 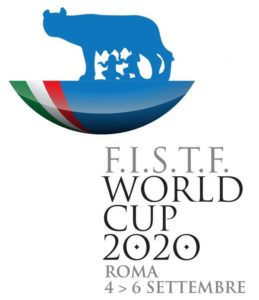