The Holiday Silver 2021 tournament, a FISTF Satellite, was held in Columbia, Maryland, USA on December 4th.
Paul Eyes and Daniel Cranston organized and hosted the event, which was the largest this year in the USA
Players came from seven states to participate in the annual tournament including California, West Virginia, and North Carolina.
Three events were held: the Open, Vets, and U19 championships.
Daniel Cranston won the Open against Patrick Sheridan with a score of 1-0. Patrick Sheridan in the final against Daniel

The Vet championship was won by Peter Alegi with Paul Eyes as runner up. Peter with runner up Paul Eyes

Sam Cohen beat Mason Lilly to win the U19 bracket. 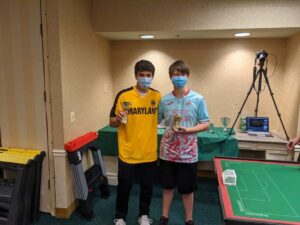 The weekend of table soccer activity including the Zombie Cup (traditional Subbuteo Rules and equipment); Daniel Cranston claimed that title as well with a win in the final against Paul Eyes. Contestants in the ‘Zombie Cup’