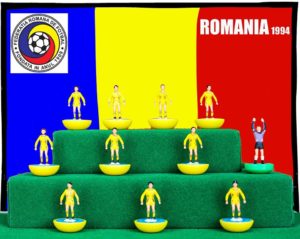 Romania Club Registration Nr.: __?__ it was registred. No data now.

FRSFM – Federatia Romana Sport Fotbal de Masa  is (will be again) the governing body of Sport Table Football in Romania. Romania is divided into 41 counties (judetul) and are in 8 development regions organised. FRSFM particpated at the FISTF World Cup 2000 in Vienna (see below). That was the only actual life sign in the past 16 years. A logo was created and the federation (association) was founded from Mr. Paul Viorel Vladu and his friends from Bucharest, whereby the association was also registred as  an official club. In Romania that is obligatory  Many people in Romania play the sectoball game (gomfoci , hungarian), which is popular in Romania.

There is one club in Bucharest, Bucuresti Table Football Club  (TFC), founded in 2016, and the contact is Massimo Dalpra.

The historical participation from FRSFM at the FISTF World Cup 2000 in Vienna. Alexandru Mardan and Paul Viorel Vladu played in the veteran category and experienced the real table football sport.  They had several practices (training) with Horst Deimel (EÖTV) in Bucharest in 1999 and 2000. Horst, then having a campany in Romania, had the opportunity to play in his company office in the evenings. Organising material for the players, the official invitation document for the Visa, confirming the warranty of finance (in case of emergency, a huge burden) and collecting money for the travel costs to Vienna. Unfortunately, Horst was not believed what he sayed and tought to the sportsfriends, and was told that they prefere to play Pro Action Table Football. Paul Viorel Vladu though took positive actions in founding the FRSFM, registering the club and also wrote the “Romania Flick” magazine. We are now (2019) looking into a positive future with a new generation of players. Maybe the FRSFM Championship Trophy will be named “Trophy PVV”.