FISTF – The Federation International of Sports Table Football is the governing body of the Sports Table Football worldwide. FISTF was founded on 16th June 1992 in Hamburg (Germany), merging the European Tablesoccer (Football) Federation (ETF 1963-1993) and the Federation of International Subbuteo Associations (FISA 1979-1996). This was achieved through negotiatons between the players and Waddingtons SSG Ltd. company.  FISTF lays down the playing rules of Table Football. These are based on the original Subbuteo (Subbuteo Sports Games (SSG), FISA) playing rules and partially through the ETF rules, but revised in such a way to suit a highly competitive and fair playing approach. The first Board of Directors was agreed on in 1992, the first edition of FISTF Statutes written and FISTF was registered in Paris, France, as an official club (Association) but named Federation as a governing world body. In the playing rules technical data were specified to define the legal playing materials, such as playing figures, goalkeepers, goals, balls and playing area. 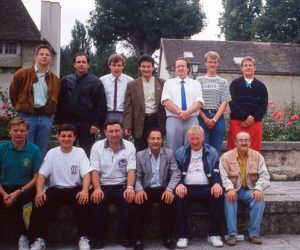 Table Football is a sport that is played by two persons on a playing board on a table measuring L=1400 mm x W=1000 mm. The playing surface is L=1200 mm x W=750 mm made of nylon or felt, material that resembles a pool table. Each player has 11 figures of 25 millimeters high over a semi-spherical base. The rules are similar to the football rules but adapted to the miniature game. An official game has 2 halves of 15 minutes each. The basics of the game is to flick a figure using the index finger towards the ball which has a 21 mm diameter, and progressing up on the pitch to score a goal.