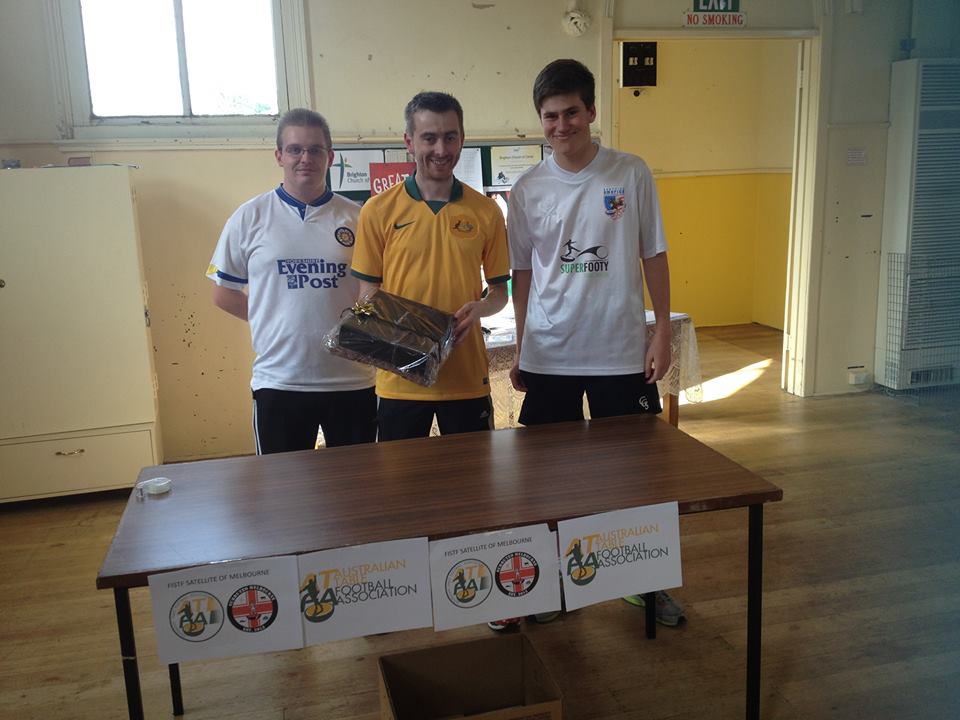 On a historical day for Table Football in Australia, it was only fitting that Peter Thomas- the winner of Australia’s last FISTF tournament in 2009 would claim victory.
In what was Australia’s first FISTF event in five years, a field of 11 players competed in the Melbourne Open Satellite event. The players were split into three groups with the top two players progressing to the final stage.

In Group A, Eliot Kennedy of the Northern Falcons TFC rose to the top after a 4-0 victory over Benji Batten and a 6-0 victory over Giuseppe Tardiota. Giuseppe had travelled all the way from Brisbane to compete and he was able to score his first goal in his second match however it was not enough to overcome local player Benji Batten who recorded a 3-1 victory and progressed to the second Stage.

In Group B, Peter Thomas, finished in first position with little difficulty. Clearly the world cup adventure had improved Pete’s ability and he banged in 14 goals over his three matches. Luke Radzimisnki took second position after incredibly tight 1-0 victories over David Simpson and Dillon Izon. David and Dillon’s match finished 0-0 meaning all players in the group would take points.

Group C, was a far more one sided affair as Carl Young put 8 past young Alex Stefanos and 9 past debutant Brian Holden, the former Welsh Champion taking no time to settle into gear. But there was still a second place available for the final round and so the match between Brian and Alex had high stakes. Alex prevailed winning 1-0 and joining Carl in the finals.

In the Barrage Round Benji Batten played at the top of his game to defeat Alex Stefanos 6-0 and Carl powered past Luke Radziminski but he was unable to keep a clean sheet as Luke scored one of the goals of the tournament to go out with a bang.

The Semi-Final stage saw Peter go on a roll and put six past Benji Batten- each goal better than the last. The second semi was a far more even affair as Carl and Eliot could not be separated after 30 minutes of time and then a further 10 minutes of extra time. Penalties were needed where Carl executed three consecutive shots to progress to the final (3-0 shootout score).

The Final was a very tight and tense affair. Peter grabbed the early lead over Carl but in the second half Carl equalized and fellow players were left in no doubt as to whether a goal had been scored after a load roar from the ex-Welshman. 1-1 at full time, the game entered extra time. With just minutes remaining Peter found the match winner letting out a triumphant ‘yes’ as the ball hit the back of the net.

And so it would be that Peter Thomas would build on his great form at the World Cup to claim maximum points from this FISTF Satellite. Big thanks must be sent to all interstate players and to Brian Holden at the Brighton Church of Christ.
The Australian Table Football Associations next FISTF event is the challenger of Paramatta to be held on November 15, interested players please contact Adrian Elmer at ajebec@netspace.net.au