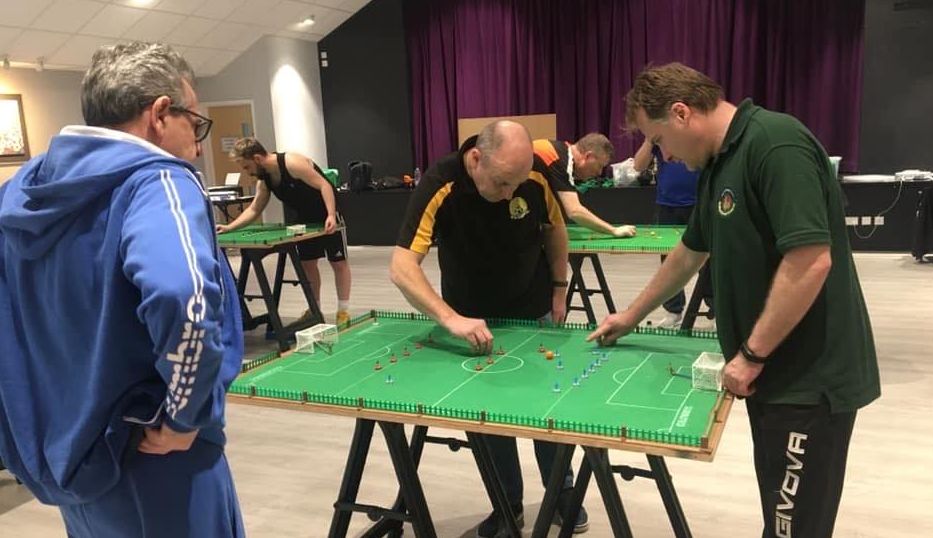 Brandon Lavender (SC Flanders/ENG) claimed the 2020 Harrow FISTF Satellite with a hard fought 2-0 win over Mark Farrell (The White Star/ROI).
Fourteen players took part at the new beautiful Tithe Sport and Social Club venue, divided between a group of 4 and two groups of five players.
As a novel twist, the tournament was played on 70s cloth pitches with original Subbuteo fences. 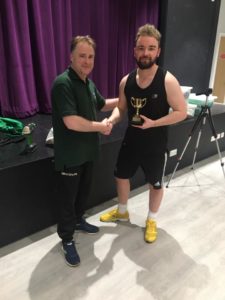 Farrell won group A and went straight to the semis after winning all his games, whilst Paul Andreas (Harrow/CYP) took the second place at the expenses of Martin Hodds (Dundee United TFC/ENG).
Hodds win ágainst Alan Lee (White Star/ENG) wasn’t enough though to put him through the group for a worse goal difference.
Group B saw Spain’s Bruno Gerosa (Mallorca Águilas FM/ESP) cruising after two wins and a draw to the top of the group but had to leave early due to unfortunate circumstances, taking a 3-0 default loss to Victor Jones (Hawks/ENG), ending in fact 3rd, That favoured Rudi Peterschinigg (Hawks/ENG), with two wins and another draw, seeing him top the group with 8 points to place himself in the other semifinal, followed by Jones on 7 points.
Group C, was a tight one, which went down to the very last game between 3 players, in the end Brandon Lavender secured himself the top of a tough group with 8 points after two wins and two draws. Marco Ghigliotti (Hawks/ENG) made sure he got the point he needed in his last game, a 2-2 draw with Panagiotis Stemitsiotis (Hawks/ENG) to secure himself the last spot available for the Barrage with 7 points. Aaron Skinner (Bristol/ENG) ended also with 7 points but a worse goal difference compared to Ghigliotti, pushing him down to 3rd. Stemitsiotis fought hard and a win vs Ghigliotti in their last match would have guaranteed him a second place but within few minutes he went 2-0 down, managed to come back but the 2-2 wasn’t enough and ended 4th. Later he took out the Plate, making is journey back to Reading a little less salty. Lee Fenton did what he could in a really tough group for him, ending last but with some decent performances. 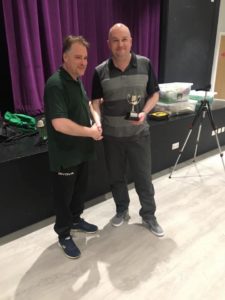 The barrage stage saw Ghigliotti easily cruising to the semis with a 4-0 win over Jones, whilst Lavender had to fight more against Andreas before coming out a 2-0 winner.

The Semifinals produced two thrilling matches. While Mark Farrell managed to beat Ghigliotti 3-2  in a very tight game, Lavender seemed to be cruising 3-0 at halftime against Peterschinigg. But just when the match looked over, the Harrow Hawks man managed to find a goal, Lavender didn’t seem to be too much upset by that, but when the score went to 3-2, he then started to feel the pressure, and from there onward it was another game, with Rudi managing to level the game 3-3 before the end. In extra time Lavender finally woke up, started to play again and deservedly found an amazing golden goal from an almost impossible position to win 4-3 and reach the final.

After an emotional semifinal, Lavender made sure he wouldn’t lose his concentration again in the final. Both he and Farrell played a very good defensive match and the first half ended 0-0, but not without several chances on both sides. In the second half, Lavender found one of his gems to put himself 1-0 up after few minutes and put pressure on Farrell. Farrell then had to start pushing upfront a bit more as the clock was running fast for him, but on the most classic of counter attacks, Brandon scored again to close out the match 2-0.