Today we have the pleasure of interviewing a Legend of Italian Subbuteo of the 80s and early 90s.
An exceptionally gifted player and with an amazing creativity, who won many events in a short time, both as an Individual as with his team of Stella Artois Milano.
Welcome Mario BAGLIETTO!

FISTF: Can you introduce yourself, for those who weren’t playing in the 80/90s?
MB: Hi, my name is Baglietto… Mario Baglietto (joking). I have played Subbuteo from 1982 up to 1992 … ten intense and hectic years. 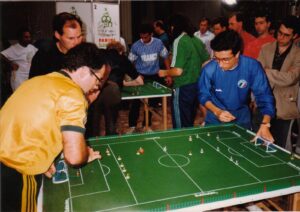 FISTF: You have been World Champion and one of the legends of Subbuteo in Italy! How were those years and how did you achieve this?
MB: Terrific! A great chance to meet people from all over Europe and to make important experiences, as a player and as a person. No doubt I still remember my team victory with Stella Artois. I did like the idea of team competitions, despite the fact that I did not play too many of them.

FISTF: Among your amazing honours list, what do you consider your best achievement in the game? And/or your best victory?
MB: I was Junior World Champion in 1986 and European Senior Champion in 1988, three times Italian Champion and one European Cup for Teams with Stella Artois Milan.

FISTF: What was the best event you attended?
MB: I was impressed by the Sucy en Brie tournament (France). There was always impressive organization and tournament climate.

FISTF: What did you like the most about playing?
MB: I did like the idea of a fair competition between two players, two opponents with the same objective and an equal starting point. 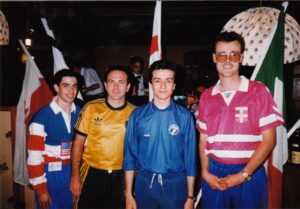 FISTF: Your game was very attacking, creative and efficient … very different from the catenaccio in football at the time! Any idea why?
MB: As a matter of fact it was a necessity: I was not very good with my goalkeeper (probably no one can remember a nice save by my goalkeeper!!!). And so my only change was to count on other things: creativity, surprise, capacity to read the game and plan a proper strategy.

FISTF: You have faced and beaten most of the other legends of the 80s and 90s. Other than you, who would you put in your top 5?
MB: My top 5: Hofmann, De Marco, Fuseau, Frignani and Massimo.

FISTF: Why did you stop playing? And would you fancy coming back? Either playing traditional Subbuteo or FISTF?
MB: Coming back? I have a seven-year-old daughter, Alice. Who knows: maybe she will be the next Subbuteo player in the family!

FISTF: Do you keep up to date with what’s going on at FISTF and in Italian Subbuteo?
MB: Subbuteo or FISTF? I have no idea of the difference… is there one? I was invited by Lega Nazionale Subbuteo to attend a tournament in Rome: they were very good in organizing it and the climate was very positive 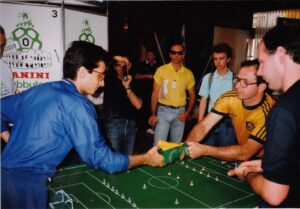 FISTF: The next World Cup will be held in Roma…probably a chance to see you!
MB: Next World Cup in Rome: Really? When and where?