Benji Batten (Melbourne TFC) claimed the first FISTF event staged in Australia for two years when he edged out Tony Credentino (Sydney TFC) in a tight Sydney International Open final 2-0 on shots after a scoreless draw. 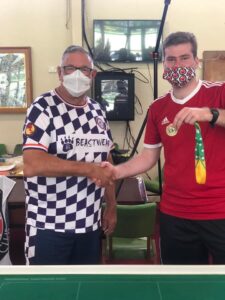 COVID has played havoc with the Australian scene over the last two years, and though a range of local WASPA events have kept activity alive, the ultimate aim was to get FISTF action happening again.
At one stage there were 28 entries in the Open, but COVID struck that down to 24, and then 21 on the day due to some late COVID withdrawals. Six players contested the U16 event and 3 women, with four in the teams event. 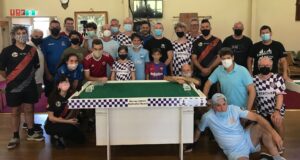 It also meant interstate contestants were limited to 2, with Melbourne’s Benji Batten and Nathan Urbaniak making the trek north.
All four Sydney clubs were involved in the organising, with the venue being the home of the Northern Falcons – the Willoughby Park Bowling Club. 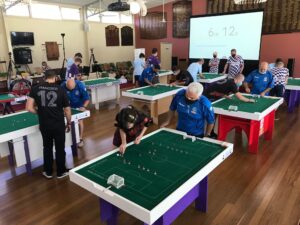 Venue was the home of the Northern Falcons TFC

A major surprise was the No.1 ranking of Northern Falcon’s Torben Pfister, the result of inactivity in Australia, but he topped his group. Groups 2 and 3 featured the biggest struggles to qualify, with Adrian Grunbach (Falcons) having the wood over Adrian Elmer (Western Sydney Subbuteo) in Group 2 and Tony Credentino (Sydney TFC) beating Paul Magee (WSS). 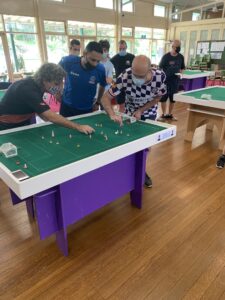 Steve Dettre (Falcons) and Steve Diasinos (WSS) continued their rivalry, with Steve Di pushing hard in the first half, before Steve De found his rhythm to run out winner.
In the Junior event, Daniel Sirmai and Gabriel Lombardi stamped their authority on the group early, but Catherine Palamara kept in touch, ahead of Taylor Lombardi and Dimitri Barbaris. In a delightful surprise, debutante Katelyn Grunbach made the semis, and scored against Daniel Sirmai before losing 4-1. Daniel beat Gabriel 2-1 in the final. 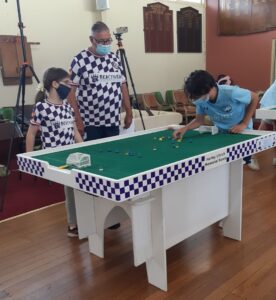 Katelyn Grunbach (left) against Gabriel Lombardi in the Juniors event

In the women’s event, Catherine Palamara beat Imojjen 1-0, with all three women players offering each other fantastic support and encouragement. 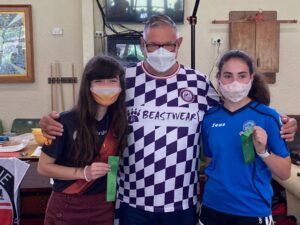 In the knockout phase of the Open, the barrages provided a couple of surprises. After playing so well in the group, Steve Dettre’s form deserted him against Tony Credentino who snatched a 1-0 win with a shot from an incredible angle. Then Johnny Ball – an infrequent visitor to Falcons’ nights – outperformed Geoff Sirmai (Hipfingerz), setting himself up for the match of the tournament, the quarterfinal against Benji.
Adrian Grunbach caused a boilover by beating clubmate Torben 2-1, while Tony Credentino ousted Eliot Kennedy (Northern Falcons) 3-0 on shots after a 2-2 draw in their quarterfinal. And while Daniele Lombardi stormed to a 4-0 in his match against clubmate Kostas Barbaris, in the last qf, it went down to the wire. 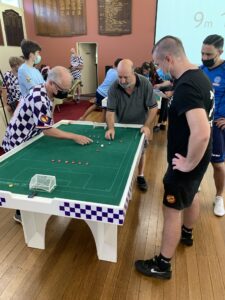 Johnny Ball shocked Benji with an opening goal, and while he pegged that back, Johnny again took the lead before it was all square at the break. In the second period, Benji steadied himself and with 5 minutes to go led 5-2, before Johnny launched an impressive comeback, replete with his own ‘crowd noise’. First he made it 5-3, then incredibly it was 5-4 with a minute to go, when Benji decided to employ the table football version of “taking the ball to the corner flag”. He saw out the clock, and afterwards Johnny proclaimed Benji’s tactics as “the greatest honour that anyone’s given me in Subbo — the fact that he was so concerned I might get an equaliser!” 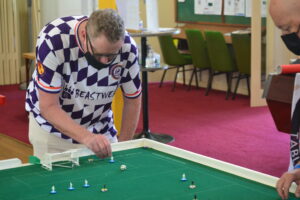 Both semi finals ended 2-1, with Tony beating Adrian, and then Benji edging Daniele.
There were few real highlights in the final, with the title decided on shots, 2-0 to Benji. 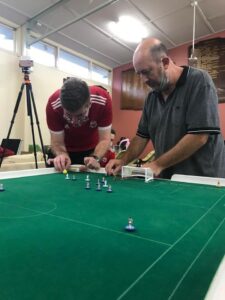 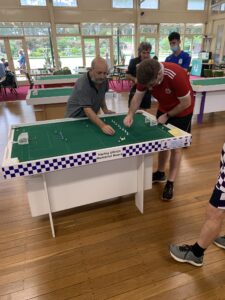 Continuing the tradition of Australian table football, the ‘Plate’ event was held as a WASPA. Following the Group Stage of the Opens event, the 8 players who did not make it to the knockout phase and were able to stay around played a knockout WASPA tournament. The draw was open and unseeded.
Adrian Elmer (WSS) was drawn against Daniel Sirmai (HIP) and eased past him 3-0, While Paul Magee (WSS) had the same scoreline against his club mate, Imojjen Elmer (WSS). Nathan Unrbaniak (MTFC) was drawn against Franck Cozzarin (WSS) and came out victorious, 1-0. The final fixture produced the tightest game, with Greg Werner (HIP) playing out a 0-0 draw with Enzo Coco (STFC). Straight to shots and the tenseness continued, Greg finally coming out victorious 1-0 in the shootout.
The semi-final pitted Paul against Greg where the Western Sydney man dispatched his Eastern rival with ease. The other semi, though, was a completely different affair. Neither player was able to break the deadlock in a very tight match and so another shootout ensued. Adrian held his nerve to emerge a 2-0 victor, setting up a grand final showdown with team mate and friendly rival, Paul.
The final itself proved to be an entertaining and open game. Both players controlled at times until Adrian was able to take the lead midway through the first half. From here, though, Paul used every tactic in his unique Subbuteo armoury to control more and more of the game and pile the pressure on Adrian. Finally, with 40 seconds left on the clock, Paul finally got his equaliser. The game, however, didn’t go to shots. Remarkably, from the restart, Adrian broke down the left, charged into the shooting zone and chipped home a winner with just a handful of seconds to go. It was a dramatic finish to a great game worthy of a final. 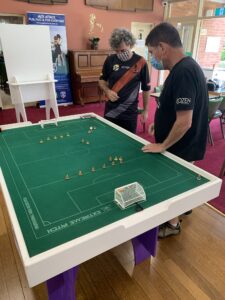 In the teams event, there were only three ‘official’ contestants, as neither Hipfingerz or Melbourne had a full complement, and combined to play in the group.
The Falcons were surprised in their match against Hipfingerz/Melbourne, but recovered in the other two games.
It came down to ‘points difference’ to decide the Falcons’ opponents in the final, with Sydney TFC edging out the players from the west.
In the final, the depth of the Falcons showed through, with a 3-0 win. 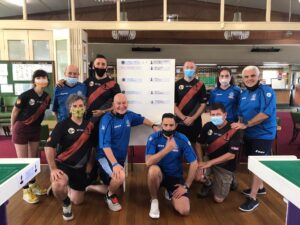 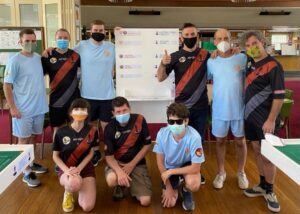 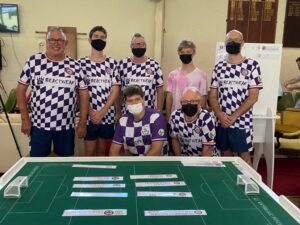 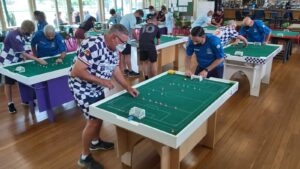 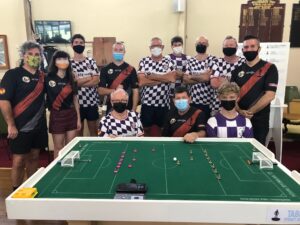 And to round out the day, an informal Doubles Event was staged, with Benji Batten and Nathan Urbaniak taking the Swiss format event.

A huge thanks to all the players and the Willoughby Park Bowling Club who delivered a fantastic venue.