Following the 2020 FISTF Congress, a working group was created to further develop one of the resolutions carried by the Member nations, relating to the FISTF Corporate Identity Norm (Resolution J8).
Our organisation has been known as FISTF since it was established in 1992.
Originally known as the Federation of International Subbuteo Table Football, when there was a separation from any relationship with Hasbro, the ‘Subbuteo’ was changed to ‘Sports’.
But still the unfortunate negative connotations of the acronym remained.
The FISTF acronym is problematic in English. The fist is a powerful, politically-charged symbol that means many different things to people worldwide. It also refers to a sexual act, most commonly expressed in English.
It makes sense to try and change our name to something that cannot be mistaken for a negative word or term.
As well, creating an artificial brand of ‘Sports Table Football’ has not been taken to heart by the community. Placing this strong emphasis on the word ‘sports’ also tends to alienate us from the wider community who also want to just play casually or in clubs and not just in elite competition.

These numbers highlight the absence of a widespread desire to include ‘Sports’ in the title, and the majority identify more with Table Football or its derivation.
The percentage of Clubs that have adopted ‘Sports’ in their title is even smaller.
By giving ourselves a nickname that has nothing to do with actually describing our game, we are also advertising the logic that we are the “Sports” version of “table football”.

We have sent a proposal to each of the FISTF Member National Associations, proposing that we significantly change the name of the federation as well as our identity to better represent our position as a bold, modern and dynamic international federation.
We know that in such a competitive world, we must always evolve and adapt to stay relevant and appeal to a wider audience.
In the digital age, the acronym of our federation has developed negative connotations unrelated to our organisation and it is important that we rebrand to make sure our first impressions are as positive as possible.
We are proposing a new brand for us: Table Football International. 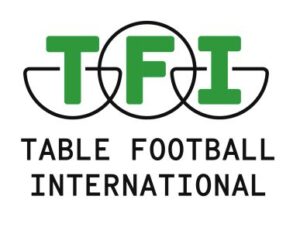 This is distinctive and simple to understand and reinforces the global nature of our sport. It is time that we stake our claim as the most dynamic table football game: We Are Table Football.