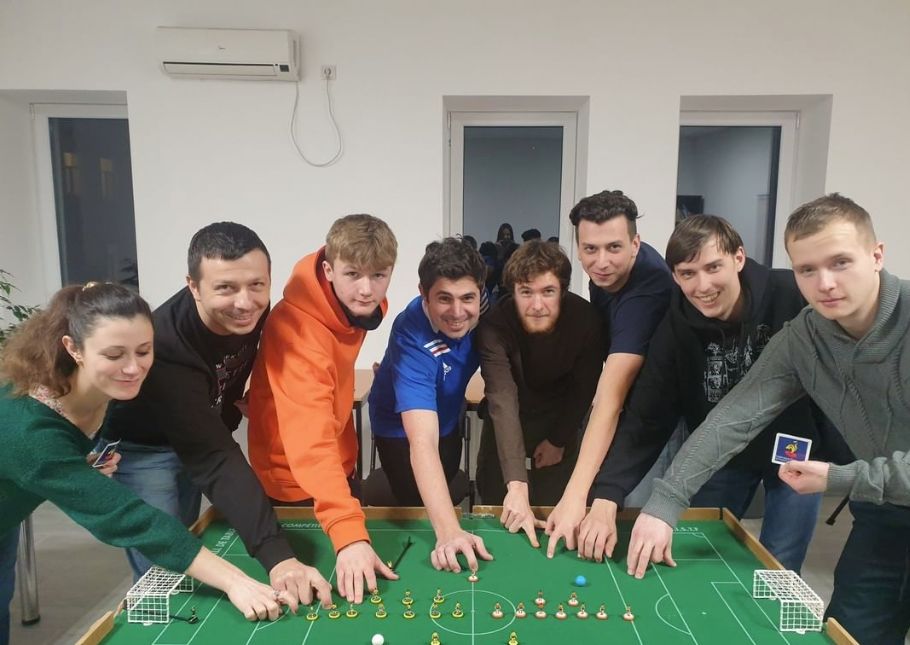 As the FISTF World Cup approaches, we’re taking the opportunity to introduce some of the newer and revived nations taking part in the World Cup.
We’re starting with our newest member, Ukraine.
Former French table football player and 3FT president Thomas Ponte is the moving force behind the nascent Ukraine association.
Married to a Ukrainian wife, he has lived in Ukraine for more than two years, working as a teacher of French to Ukrainian students.
“My life was in Odessa where my job was and our flat. I have had official residency in Ukraine, and even if we are now currently in Paris, my aim is to return to Ukraine as soon as possible: our life is in Ukraine,” Thomas said.
“In July 2021 I started teaching table football as well to my language students. 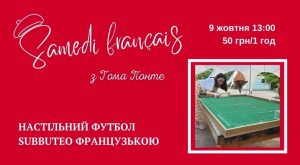 “I founded an Instagram page to improve the game in Ukraine and reach out to more players. 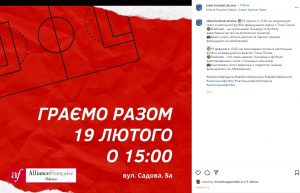 “We were well on our way to planning Ukraine’s Championship in June 2022, combining the players in Odessa with others we had found in Kyiv.”
Unfortunately, events intervened in Thomas’ plans.
“I woke up in the early morning of 24th February hearing explosions near my apartment in Odessa,” he said.
“No one knows what could happen in Ukraine in the next months especially in Odessa which is a strategic city. Then I hope to continue my life there when peace will come back. But it’s currently very difficult to project yourself into the future.”
Thomas believes things can develop in Ukraine with table football.
“I started to propose table football as an activity for the language school where I work in Odessa. I built a special table that I could transport alone (I have no car in Ukraine),” he said.
“In the beginning it was difficult because no one had heard of the game in Ukraine, but step by step I tried to attract new players and we were at least 10 players by December 2021. “ 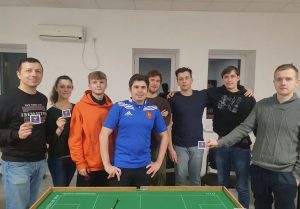 He said the first approach was to present the game as a discipline and not as a toy. He also appealed to family groups of adults and teenagers, winning them over.
“I didn’t feel any problems to motivate them to continue to play. Even more for players in Odessa for whom the prospect of a World Cup was a big motivation. “
Thomas’ and his players were all set to build three more tables for their Odessa club, in preparation for the June 2022 Ukrainian Championships, until the war. Additionally, he was looking long term.
“I have experience as French President, co-organizer of one World Cup and several international tournaments, to build things step by step,” he said.
“First developing the game in local clubs and then proposing international tournaments,” Thomas said.
He wasn’t overly optimistic about international events, knowing that he probably needed a large proportion of international or players from outside Odessa to make a successful event. 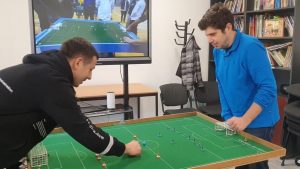 “But we have to have plans!”
Thomas understands why there are suspicions about the Ukrainian association.
“It was never my intention to do much promotion about my project to the international community before it started to be solid,” he said, explaining why to a large extent most people in the table football community were unaware of activities in Ukraine. 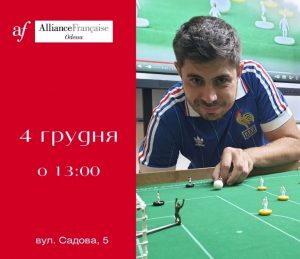 “Only a few players in France knew that I played table football in Ukraine. You can check the Instagram account I created, and I did first post in November 2020.” (www.instagram.com/table.football.ukraine)
“I think those who know me (I was more active in FISTF’s tournaments in 2000s than 2010s) know my dedication to table football,” Thomas said.
The war then accelerated Thomas’ plans.
While he was a few months short of the FISTF requirement for changing playing nationality (at least 3 continuous years residency of the country represented by the MNA of which  they are applying to become a member) he applied to FISTF for dispensation, which was granted.
“I didn’t do this – getting a Ukrainian team to play a World Cup — for myself. All reactions I have had in France about my new sport nationality were positive.
“But I can totally understand that some people believe that Ukraine is a fake federation.
“It’s why people are surprised to see Ukrainian players with French names registered. They must understand that any men aged from 18 to 60 cannot leave Ukraine.
“We have even had to withdraw one of our players who is now with the army, and there are others still in Ukraine who could be enlisted to defend their country at any moment,” he said.
“Then, when one of my colleagues,  Nicolas Bethencourt, with dual nationality, who also lives in Odessa, returned to France because of the war, we decided nevertheless to play this World Cup,” he said.
“We have also two other registered players, under 18 players, which is why they had the right to leave Ukraine, and moved to western Europe (one in Belgium, one in Switzerland).
“We will do our best, despite the current difficulties, to play in Rome,” he said.
“I can well understand players’ concerns, but we are there to develop our game.”
“For sure, once peace returns to Ukraine, we will build again,” he said. 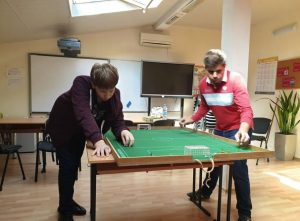