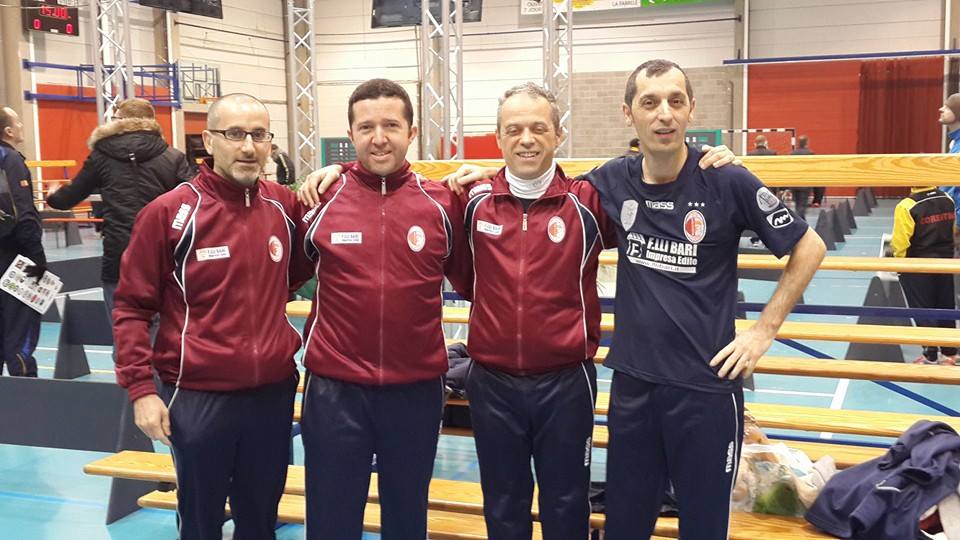 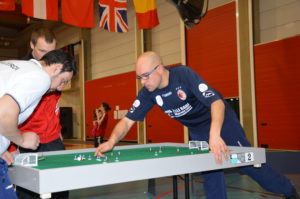 Last week-end Frameries was as every year the center of the subbuteo planet. Players from all over Europe came to attend the world’s biggest tournament and this year, we had again a field of more than 200 entries. On saturday, 38 teams were dropped in eight groups and the level was very high with many top european teams while AS Hennuyer was fieldieng five teams and the neighbors of SC Eugies had four teams. The event was very open till the semi-finals but at this stage of the day, Reggio Emilia defeated the Falcons Athens on goal-difference while the Valletta Lions beat SC Charleroi by a victory (2-1). The final was disputed till the end but this time, Reggio Emilia proved to be the side with more experience as Flores (see upper picture in his game against Charleroi’s Michael Casciano), Cremona, Licheri, Monica and Bari won on goal-difference (2-2 and 8 goals to 6). 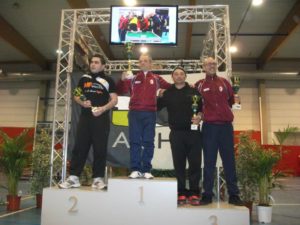 The Open category was full of surprises. This time, the top seeds didn’t manage to qualify for the final. In the decisive game, we had a surprising match between Italy’s Emanuele licheri (Reggio Emila) and Malta’s Angelo Borg (Valletta Lions). The Italian was the final winner after ho beat Borg by a spectacular 4-3. Carlos Flores and Mark Gauci were the semi-finalists. On the picture, see the podium of the open category.

There was another Valletta Lion in a final as Charles Aquilina won the veterans section. The Maltese beat Gibraltar’s John Field (2-0).

In the other categories, the winners were Spain’s David Gonzalez (U19), Italy’s David Gonzalez (U15) and Belgium’s Corentin Bouchez (U12) while the ladies category had a Belgian final between Emilie Despretz and Jessica Hardenne. Home player Emilie beat the world champion on shots.

Congratulations again to AS Hennuyer for putting a perfect show with a positive spirit and an amazing field of players.