Last week-end the club of Puylaurens in the South of France was holding a special FISTF week-end with two individual tournaments. The International Open ended with no surprise as Jean-Marie Amberny took the hoors after defeating home player Serge Leroy in the final. Both players already met in the group stage and Leroy had won the first game. Mongi Rouis and Roger Trouillard were the semi-finalists. 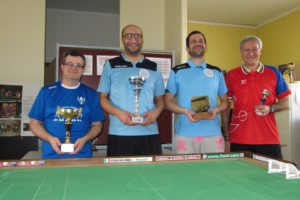 On Sunday there was a Satellite with different players in the final. Mongi Rouis defeated Boissy’s Marc Guyot to claim the title. Roger Trouillard and Jean-Marie Amberny were the semi-finalists.