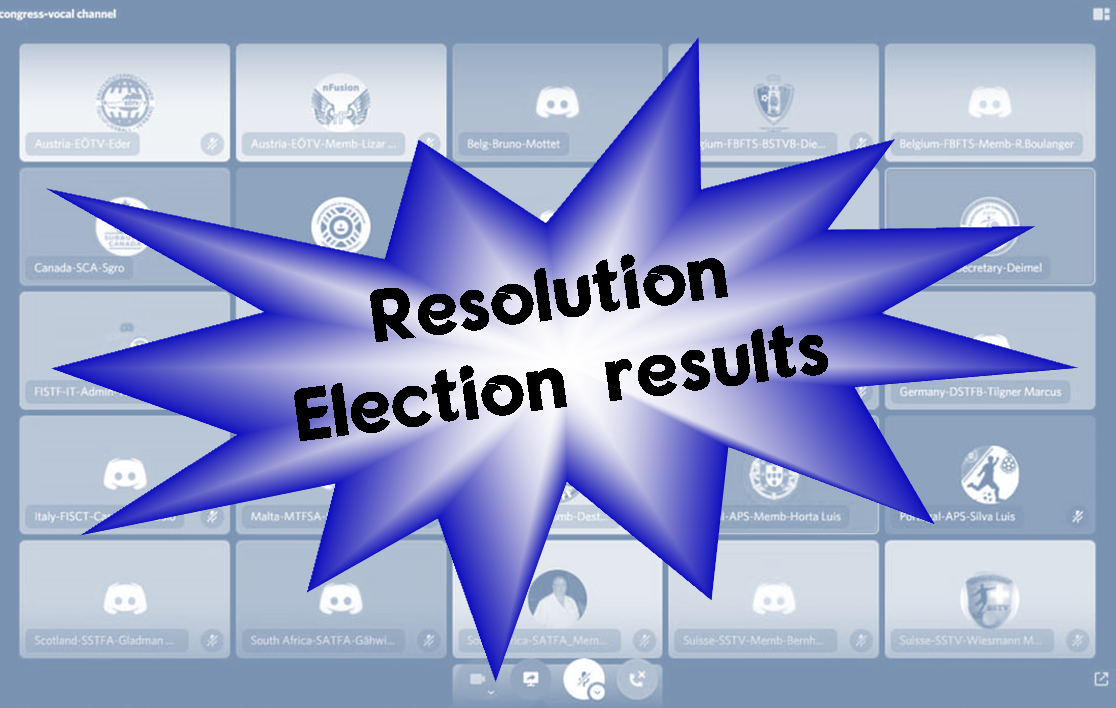 A new FISTF Board has been elected after the 2020 Congress, with some returning office bearers, and some new faces for the future.

Jurgen Balzan of Malta, possibly becomes the youngest FISTF Board member ever at 19, and has taken the responsibility for Development of our Sport. As the current No1 ranked U19 player in the world, he has a serious connection to the youth of our game and hopefully can bring a fresh approach to this critical area.

Speaking from Malta, Jurgen said: “I am honored to be part of this team and looking forward to work for the greater good in our sport.”

Joining him on the board is Canada’s Mike Sgro who was elected as Media Director.

“I am thrilled by my election to the F.I.S.T.F. Board of Directors in the Media Director role. I am humbled with this show of support from the National Member Associations and am prepared to do my best to showcase our wonderful sport to the world. We have just passed resolutions to ensure an update to the F.I.S.T.F. brand and I am so grateful for the opportunity to work with the entire board and wider community on this important initiative, among many others.

“Being from a country with such high growth potential for the sport, I have never before been so assured that this community continues to support growth in new regions. If anyone out there has ideas or suggestions for branding and/or media, please don’t hesitate to reach out and message me. I aim to strengthen the quality of conversations on how we perform our public relations. Most of all I hope everyone is staying healthy and happy through this oddest of holiday seasons.”

A critical new appointment is that of Francesco Lo Presti (Italy) to the role of General Secretary, replacing the outgoing Horst Deimel. We thank Horst for his fantastic work, and now look to Francesco, whose first task will be to ensure all information from each of the Member Nations is up-to-date as we move into 2021. Brandon Lavender (England), who had been on the board in a co-opted role, had his position confirmed at the election.

“I am happy that Federations from all over the world have chosen me for this important role. We must all work and collaborate together for the spread of our movement. Congratulations to all the others too!” said Francesco.

Several resolutions that will have a positive impact on the development for youth, such as the reverting of age categories to Under 16 and Under 20, were adopted. To ensure consistency, the Veterans category was confirmed as Over 45.
Canada’s membership of FISTF was confirmed, while South Africa, Chile and Norway are showing high interest in joining FISTF. A number of other nations have been in discussions, but more work will need to be done by the FISTF Board.

While both the Official Handbook and Tournament Organisation Handbook were approved, it was accepted by the Board that there needs to be more work done on these. Anyone who is interested in taking part in this work is encouraged to approach the FISTF Board.

While there had been a significant amount of work done of proposed changes to the FISTF Playing rules, no concrete decision was made and it is clear some amendments will need to be made. All MNAs will be approached about the next phase of decision making about the Rules.

The age categories change from u-15 to u-16 and u-19 to u-20, which is a return to the original age category from 1992/1993. This will give young players the opportunity to participate up to 10  years in youth categories, given an equal chance for Confederation and World Cup participation.

A significant decision was the vote to include a ”traditional Subbuteo’ category at the FISTF World Cup, A working group will be put together to decide on which rules to be used. This is a major development to encourage more players to participate at FISTF events. This will be a new “code”  for world sports table football. Many other codes exist too, such as Sector ball, 12 Touch, chapas and other codes.

It was agreed that FISTF is in need of an online database with online registration and more. The administration is getting more difficult and widely time consuming. A working group will be established to propose a way forward for this.

FISTF saw a need towards an Independent Homologation Executive Committee to challenge the applications by new manufacturers for all kinds of playing equipment.

A standardised FISTF Corporate Identity has been produced to ensure identical designs and usage  world wide, so that players, clubs, printing companies and manufacturers use the same designs given by FISTF. Colour definitions and FISTF Font are going to be standard features. All national associations will be provided with a standardised ‘kit’ of information, logos and fonts.

Three ambitious proposals, concerning the world cup, a world league and a separate club based system, were not passed, but the proposals provoked much debate and there is hope they can be revived and reworked in the future.