Saturday the 27th of November saw the playing of the 6th South African National Table Football Championships proudly hosted by the Joburg Eagles and sponsored by Ola Ice Cream and Just for You Meals.
Randburg AFC hosted the above and the Senior Open proved to be the crème de la crème of the Weekend of Festival Subbuteo.
An immaculately presented hall featuring six tables ranging from a retro Subbuteo field, three impeccably produced local pitches (by Gary Downs of SA Bases) and two Astro pitches greeted the players and created a Subbuteo Hall of Fame. 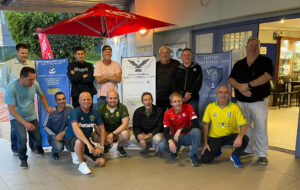 English President Jason Finch, who especially flew from Cape Town to Johannesburg, was undoubtedly the star attraction. The top ranked South African players from all active clubs were present to partake and enjoy in the fun and festivities which epitomises the local South African Subbuteo tournaments.
A seeded draw pitted the 16 combatants in four groups with the top 2 players qualifying for the Cup event and the bottom two players vying for the Plate Trophy.
Justin, Sean Morgan, Jason Kennedy and Clinton Gahwiler (all the way from Cape Town), topped their respective groups with Angus Begg, Martin Plascott, Ian Clarke and Clifford Graaff were the runners-up.
The quarter finals dished up some scintillating games with Justin easily qualifying for the semis (even with the help of the local Mzanzi Youth Choir who added some musical impetus), Sean, Clinton and Martin accounted for Clifford, Angus and Jason respectively. 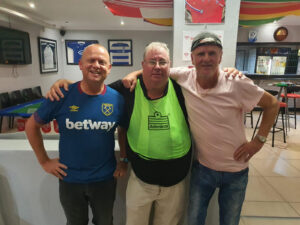 The semis saw Justin outclass Martin and Sean defeat Clinton in a titanic struggle.
The final pitted the best local player, Sean Morgan against ‘Flicking Finchy’ from England.
Although local Sean tried his best, the experience and sheer class of Justin reigned supreme and he beat Sean coutersy of three ‘HOLLYWOOD’ goals which left the spectators in awe of the skill level of the new South African Championship winner.
In the Plate section, Gary Downs, accounted for Guiseppe Mantazza in an exciting penalty shootout. As a momento of the SA Championships, all players were presented with a commemmorative
goalkeeper with the SA Champs logo on the handle and a beautifully crafted penant, both made by Gary Downs and sponsored by the Johannesburg Eagles!!!!!
This brought the curtain down on a weekend of exciting, competitive (yet friendly), joking (and some serious) and general good natured banter and the building of new friendships,
fostering of existing ties and more importantly celebrating this great game which has brought so many hours of joy to people all over the world.
Look forward to seeing you all at the next SA Champs in 2022 held by ETS Subbuteo Club. 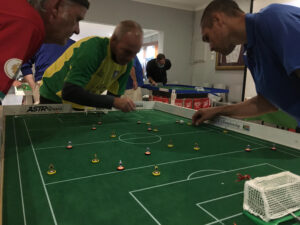 The South African Subbuteo Festival weekend flicked off on Friday evening with the Johannesburg TFC aka ‘The Eagles’, hosting the South African Table Football Associations (SATFA) first ever ‘Old School
Subbuteo National Championships’.
This was the first ever ‘Old School’ Subbuteo Tournament hosted by the Joburg Eagles and the unprecedented success will definitely see more of the latter being introduced at the Joburg Eagles events.
Kevin Mudie, an ex South African professional football player, was the guest speaker and assisted with the seeded draw.
A very competitive field of 16 players were drawn into 4 groups. Unfortunately due to the Corona worries the field could’ve been a lot bigger, however a great evening of ‘Old School’ Subbuteo fun was had on the classic ‘cereal bowl’ bases.
Finch was a most welcome guest, and proved his superior class against the cream of the crop from South Africa.
The top two players from each group qualified for the quarter finals which saw Justin, Sean Morgan, Clinton Gahwiler and Ian Clarke claim good wins to qualify for the semi finals.
The semi finals dished up two very close and competitive games which saw Justin and Ian qualify for the Final by virtue of one goal advantages against Sean and Jason Kennedy.
In the spirit of the ‘Old School’ game, the final was played on a retro Subbuteo pitch to capture the full ambience of the ‘old School’ Subbuteo which we all love.
The first ‘Old School SA Final’ produced a tight game, however the sheer class and experience of Justin proved superior and he claimed a 1 nil victory against Ian Clarke, who must be a contender
for ‘Most Improved Player’ on the local South African circuit.

Results of the Open:
SA Champs