The Glasgow Grand Prix of 2020 was one of the last FISTF tournaments to take place before Covid 19 struck. It’s been a barren two years and uncertainty around the pandemic is still with us. Therefore, in planning this year’s competition Glasgow Table Soccer Association (GTSA) took the decision to scale back.
We would move to a smaller venue, downgrade ourselves to an International Open and only have an Open category. If we had more than 20 entries we’d be satisfied with that. The entry list of 38 was beyond our expectations and it was a high calibre field at that, with top players from all over the UK. People were just keen to get back playing.
Our venue was the Royal British Legion in Glasgow’s west end, GTSA’s latest home in its 49 year history. A portrait of the Queen looked down over the tables. Fitting perhaps, as this was undoubtedly an all British tournament.
With 38 players competing, two groups of 3 were necessary and it was cruel luck for Ruby Matthews that she was drawn with Elliot Bellefontaine and Steve Bennett, arguably the number one players in England and Scotland. Undaunted, Ruby performed well, scoring in both matches. Elliot and Steve had to work hard for their 3-1 victories. Steve edged out Elliot in the opening match of the tournament. They weren’t to know that they would face each other again in the tournament’s final match.
Top scoring game of the group matches was Martin Blanchard’s 7-4 defeat of Glasgow’s Baver Bari. Baver then went on to lose another 7 against Kevin Cordell. But this wasn’t the end of the competition for Baver. Redemption was at hand! He won 4 Plate matches (including a 3-1 defeat of the aforementioned Kevin Cordell) to reach the final only to lose to Wolverhampton’s Richard Badger.
It is a rare thing in Scottish sport to ‘qualify out of the group’. Congratulations therefore to GTSA’s Tom Burns and Dave Butler for doing just that. Both then won their barrage matches, Tom with a memorable 3-0 win over Aaron Skinner. Tom then lost narrowly to Brian Daley whilst the ever youthful Justin Finch ended Dave’s hopes.
The semi-finals saw the pairing of Steve Bennett with the improving Alan Lee and Elliot Bellefontaine with, for many, pre-tournament favourite Chris Thomas. It was Steve and Elliot who came out on top, Elliot scoring his winner in extra-time.
In the final it was Steve who made the early running, creating the better opportunities. Then…disaster! Inexplicably he lost possession just outside his shooting area. Elliot pounced and took the lead. Thereafter Steve was chasing the game as Elliot took control. Steve’s goal was a consolation. Elliot was Champion and the trophy was going south to England. Did the Queen approve? It was difficult to tell, her face as enigmatic as that of the Mona Lisa.
On Sunday the team event was contested by 8 clubs. Glide, Slide, Chip and Dip were far and away the favourites. They are a super group, the Travelling Wilburys of the Subbuteo world.
Competing for the first time was Golazzo SC. The Edinburgh club was formed by Marco Bevilacqua after successfully running the Edinburgh Monday Night Subbuteo. He persuaded top Scot Gareth Christie to join his inexperienced team which included Lindsay Hamilton, Scotland’s first registered female player.
As expected ‘Glide Slide’ cruised to the final winning all but one drawn match. There they were up against Wobbly Hobby’s A team. The final turned out to be very hard fought with the favourites winning only 1-0, thanks to Justin Finch defeating Ruby Matthews.
The Plate final was contested by Glasgow ‘A’ and Glasgow ‘B’, each having finished third in their group. The ‘A’ team recorded a 3-1 victory and no yellow or red cards were shown! Well, there weren’t any referees.
All in all we think it was a successful tournament and we thank all the players who travelled to Glasgow and contributed to that success.
It’s good to be back
Dave Gladman 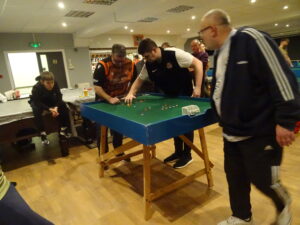 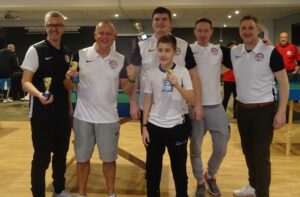 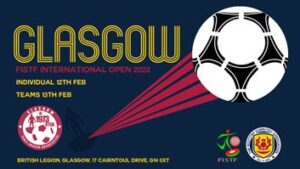