Alan Lee (ENG/Wobbly Hobby) and Arturo Martinez (ESP/ACS Perugia 1973) were the beaten semifinalists.
In the U16 category, Martí Rosa won a group of four players.
The tournament was held in the Barcelona municipality of Mataró by the reborn and historic Club AS Iluro FT, thus returning the Catalan municipality to the map of International Table Soccer.
The event, played on Astropitch fields, was attended by 22 players, among whom the presence of the main swords of the Catalan circuit stood out, the dean Arturo Martínez, the very powerful Vicenç Prats and Ferran Coll and the tournament director Alex Araujo, among others.
The national scene would be completed by Julio Candelas, who came from the Madrid town of Moralzarzal, and José David Somoza who came from Mallorca.
The international participation was made up of England’s Alan Lee from Wobbly Hobby Subbuteo Club who had just participated in the last tournament held in Mallorca and Singapore’s Nic Tan belonging to SC Dragons Hong Kong who thus repeated in an international tournament in Spain after his visit to the IO of Moralzarzal in 2019.
The tournament was organized in Open, U16 categories and the newly released Silver Cup.
In Open there were no surprises in the group stage. The favorites showed their superiority, moving on to the next phase with goalscoring generosity.
More interesting were the quarterfinal matches after the celebration of the Barrages in which Nic Tan lost 1-0. Here, again Prats and Lee presented their candidacies for the final victory with two goals against Martí Rosa and Somoza. The emotion would nest in the other two quarterfinal matches, in which the players stretched their efforts until the last differential shots. Finally, Coll and Martinez would be the ones chosen to play the semifinals, in which only Ferrán won the prize of playing the grand Final against a Prats who returned showing himself untouchable as in the rest of the tournament, to take the victory of the First Barcelona Satellite ( Mataro).
In U16, Martí Rosa stood out from all the participants for his attacking game that allowed him to break his opponents with bulky markers. 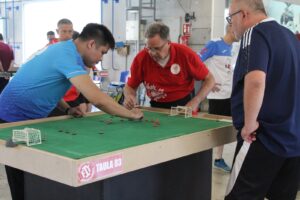 A singaporean, an Englishman and a Spaniard walk into a tournament … action from the satellite.

In the Silver Cup, a José Luis Márquez took the cup in a tight final against Ferrán Borbones.
Congratulations to all the participants and to the Iluro Club for the success in this First Barcelona Satellite Tournament (Mataró).
We encourage readers to view the tournament matches available on the futboldetaula youtube channel and on the different platforms and social networks of the AEFM

You can find the full results and some media on the website of the event: http://www.iluro.futboldetaula.cat/satellite-international-mataro-2022/

Also, in Youtube the full matches played in table 1: https://youtube.com/playlist?list=PL9vFLC-d3t1qFknKzvE4aSTmx007ZBRwv