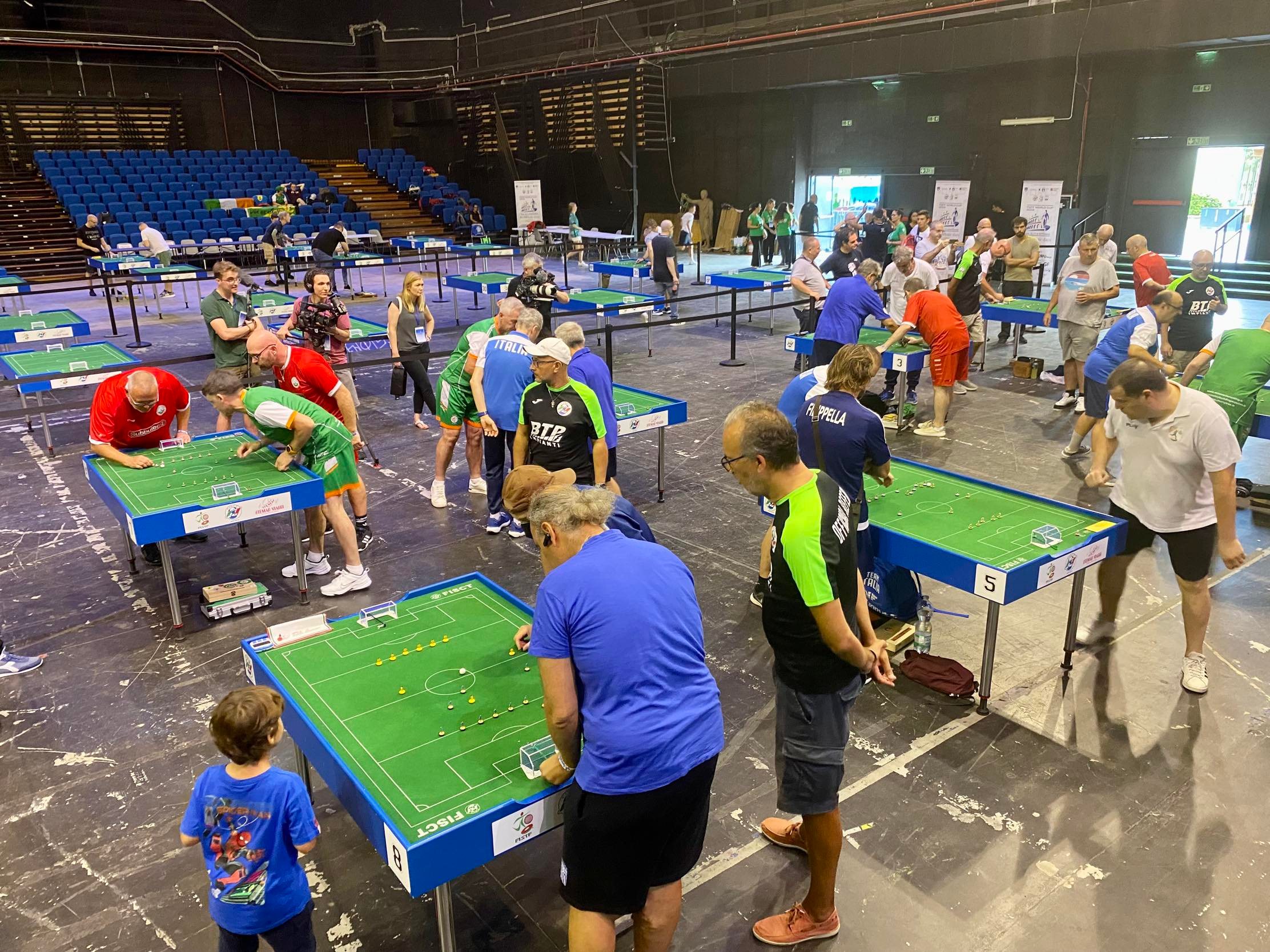 Competition started on the first morning of the FISTF World Cup, with the Traditional Subbuteo event.

The FISTF News Team will publish quotes and score updates from around the tables. 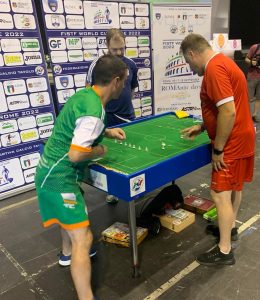 ROME – Comments from Rudi PETERSCHINIGG (ENG) and Gary MOORE (IRE) after PETERSCHINIGG won 4-2 in their first game in Group 1 of the Traditional Cup at the FISTF World Cup in Rome on Friday.

Rudi PETERSCHINIGG (ENG)
On being back at the World Cup after it was delayed for two years due to Covid-19:
“It’s absolutely amazing to be able to travel again and come to the tournaments and see all the guys who I missed. It’s an unbelievable feeling, it’s giving me goose bumps.
“I’m so honoured to represent England, honoured to play a guy like Gary and it’s just a great atmosphere. We missed it.”

On being a late replacement in the Traditional Cup:
“When they did the draw a couple of days ago I wasn’t in it, so I said, ‘Fine, I’m going to have a lovely day off just flicking about.’  And no, it wasn’t the case. The French unfortunately couldn’t make it because they lost the flight so I had to replace the French. As long as I have fun, it doesn’t matter.”

On playing traditional rules:
“First of all it’s difficult to switch your mind over about the rules. It’s a completely different game. But still, it’s such a great experience, as long as you remember the rules at the right time.
“I love it anyway, I could flick bottle tops and I’d be happy anyway, so it doesn’t make any difference really.”

Gary MOORE (ROI)
On playing his first game:
“A little bit nerve-wracking, a lot of preparation goes into the World Cup in general. It was good to finally get here and get the first game out of the way.”

On playing traditional rules:
“It’s good back playing traditional rules as well. Sometimes you have to think before you do something, so sometimes you lose your flow and your rhythm. But it worked well, I played OK.
“Sometimes it can change the rhythm you can normally play with as well. The traditional bases, they tend to curl a lot easier and some tend to not be as stable as the new bases.
“So it’s a little bit different, when you go for a long ball and you think normally you would get that but you don’t .”

On playing against PETERSCHINIGG:
“Rudy’s a very good player so as soon as you make a mistake, you get punished. It’s good to come up against somebody as good as Rudy first.”