We took the opportunity to have a question and answer session with the master.

How did you first start playing Subbuteo?
“I started in ’74 when I was 13 years of age. A friend of mine got it as a present and he needed an opponent and I was the victim, so in this way I got a way in. I started and thought, ‘That’s a very good game,’ and became a bit enthusiastic about it.”

Where there many other players in Switzerland at the time?
“Oh yes, back then Switzerland was actually quite leading in this Subbuteo world and I had great masters who showed me how to play the game and that was actually the base for my future success.”

When did you realise you could be a top player at international level?
“It took me about five or six years where I reached a level where I could win my first international competition with the Open Cup in Austria 1980. That’s a long time ago!” 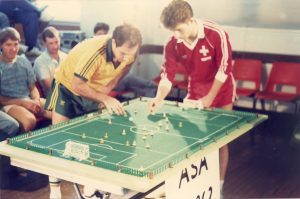 Did Subbuteo ever become well-known in in Switzerland outside of the playing community?
“In Switzerland, Subbuteo was never a big thing. The market is far too small and the Swiss people really were not aware of that game and still aren’t. It’s a very small, niche game but still, in the course of the last 40 years, many people got to know the game, mostly through personal relationships.”

What are your best memories of your career?
“There are various good memories, great memories. The victories are probably those moments which are most staying in my memories but after all I had a very nice experience on various levels, not least on the personal side too.
“Thanks to this game, I met my wife and have two wonderful children with her. So there’s the game, competing, but also the social side, from meeting numerous friends and still maintaining those friendships to some extent and even down to the family level.”

Was travel part of what the game gave you too?
“That was a huge thing for me back then as a young man, or a teenager actually, to have gotten these opportunities to travel and meet other people with the same interests, which otherwise wouldn’t have been possible.”

Why were you interested in producing new equipment for the game during your career?
“When I was active, the limitation of equipment was a burden and the situation was dominated very heavily by Waddingtons, by the Subbuteo producer. And I thought it would be time to open this gate. So I put some effort in and developed this base, this figurine base, which had a larger, lower surface which gave the figure much more stability. This was the base for many other products to be released by other producers.” 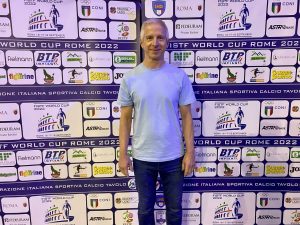 What changes have you seen in the game throughout your life?
“I would say the actual game in the core itself is unchanged. But, of course, there are various components, starting with the rules, continuing with equipment. It’s difficult to point to one element which has a bigger importance than the other. There are numerous little changes but as I said, the core itself is unchanged.”

Why did you step away from the game?
“I finished my individual career in 1990 and then I focused on the creation of this federation, of FISTF, and then the job was done. The focus in life changed – I created a family, went abroad for business, so I just had other interests.”

After a long time away from the game, why did you come to Rome 2022?
“The reason why I wanted to come is that exactly 30 years ago we created this baby, this world federation, with the intention to bring all the Subbuteo players of the world together. I haven’t been in contact with the sport for many years but I thought 30 years is a good reason to come back and see how this baby has developed.

“I’m just thrilled to see that it became an adult and successful in actually materialising those objectives that we started with and thought might be one day possible. It’s very satisfying and makes me happy to see what I have seen now these two days here in Rome.”

What do you see as the future of the game?
“I still think this game is extraordinary in various aspects – in technical aspects, in tactical aspects. Alongside all these electronic games and other spare-time opportunities for children or young adults, it still has its place.
“And I think that the social aspect of it is undervalued today and specifically in times of Internet and social media and so on, I hope – and maybe it’s more a hope than a realistic judgement – that it will continue to expand and bring up the value in its core: to meet people, to face people in a competitive way but meeting friends. And meeting friends is such an important thing, and if you can do this on a common base, across all continents, I think that’s a big value for hopefully many people to come and many generations to come.”