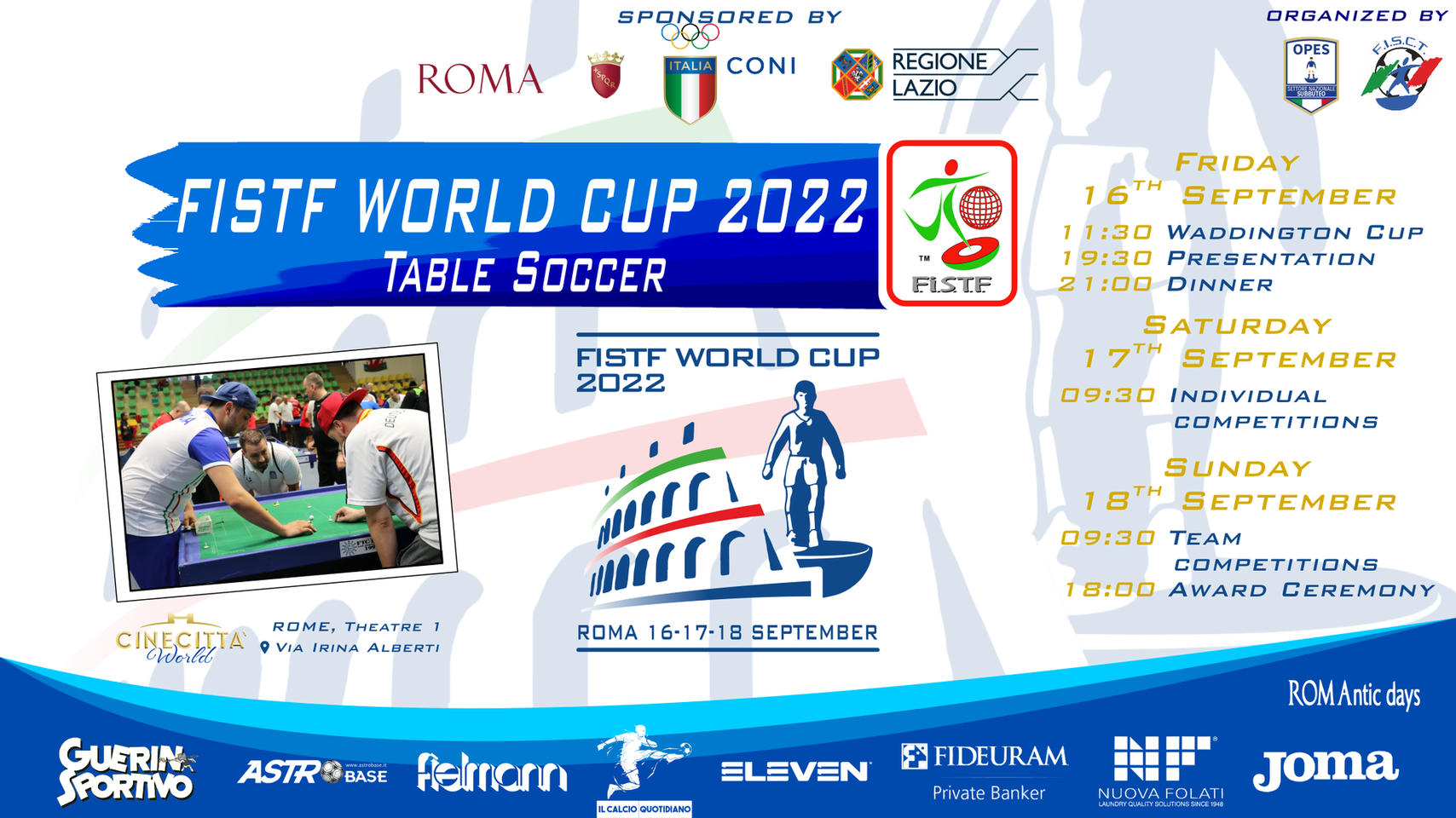 The FISTF Board has decided to respond to a posting on social media from Mr Georgios Dimakeas, President of the Greek association.

At the outset we should say that we are surprised that the post was noted as a ‘Formal Protest’. We would have expected such a communication would have been addressed directly to FISTF, rather than a social media post.

A key point to be noted is that the much debated entrance fee to the Cinecittà World (venue of the World Cup) is now €15, and not as previously noted, €22.
Those staying in designated hotels will be provided with the tickets as part of their accommodation fee.

Those not staying in designated hotels must contact the LOC. If you want the tickets, you can write to eventi@fisct.it.
This applies to all players and all MNA officials listed on the form F40B, not just those staying in
designated hotels.

As has been stated, the change of venue for the World Cup was an unfortunate and unexpected occurrence. As happens from time to time even in the world of professional sports, venues can be changed, and events postponed or cancelled. This was not intentional.

Regarding completion of the F40B registration form for the World Cup, the form clearly noted that there were six places for the Team members in team events. This was decided by the Board as a whole and was included in the FormF40B. Of the 18 Nations that submitted their Form40B listing teams to FISTF, only one (Greece) decided to add a 7th member.

It is true that I accepted the original form F40B on the basis that tickets were already booked. It was also pointed out by me that there were 4 players named in teams’ events who might be able to qualify for individual events as wild cards, once all prime players and reserves are allocated and there are spaces remaining. However, both the Open and Veterans Individual events are over-subscribed, meaning there is no space for any players as Wild Cards in Open or Veterans.

Mr Dimakeas’ post stated “they insist, without explanation to date, to declare a maximum of 6 players”.  This is incorrect. On 12-June in an email to Mr Dimakeas it was outlined that the number of 6 was decided by the Board to ensure smoother operation and less non-playing personnel around tables.

Mr Dimakeas’ post stated “Due to the above, the Greek Federation is forced to officially protest.”

As at midnight July 23, FISTF has not received any “official protest”, just notification of a social media post.

Concerning issues relating to the absence of a FISTF Sports Director. The FISTF Board has attempted for almost a year to ensure the position of Sports Director is filled.

We have on record one candidate who applied, but whose candidature was in fact not supported by the Greek association. For the sake of confidentiality, we prefer not to name the candidate nor the comments from the UHTF about this person.

We have no record of any other candidate from Greece.

We have actively pursued a number of other possible people to take the role, across a number of countries. One was keen to assist in the latter stages of the Calendar creation but had no interest in a fulltime position. Others outright declined, for a range of reasons. And we cannot speak on Mr Eric Naszalyi’s behalf whether he would be prepared to step back into the role from which he resigned.

If there is anyone keen to nominate for the role, please let us know.

As to the comments about our Secretary General: Mr Lo Presti has worked exceptionally hard over the last year with our extended Board, particularly with Roger Trouillard, to keep the world ranking operating and liaising with event organisers. The rest of the board has done what we can to help. But he has performed his normal tasks as well as doing the Sports Director duties. I should emphasise that he, like all of the Board, are volunteers, doing what we can for the benefit of the game we all love. But he – like the rest of the board — is waiting for someone to step up and help. And by that, I mean not just help the FISTF board, but the whole table football community.

The post alleges that Cinecittà World “does not meet the criteria of being in the city and having public transport”.

Nowhere can I find such a criteria listed in any FISTF documentation. In fact, the last tender for the World Cup, issued by FISTF in December last year, states:

It is highly recommended that the venue be in close proximity to a major international transport hub, with sufficient 2 and 3 star hotels nearby.

There is no reference to “in the city” or “having public transport”.

Out of interest, the Cinecittà World venue is 15km from Rome international airport.

Concerning transportation, we recommend that contact is made with your hotel/accommodation on the feasibility of a shuttle bus being organised. I know this has already been done by some delegations.